This wine celebrates a wonderful friendship from times past.
Radegonda, Queen of France, lived in the sixth Century.
After a short time she left the King and the Court to found the Convent of the Sacred Cross in Poitiers. Twenty years later, Venanzio Fortunato, already an illustrious Latin scholar, stopped at the Queen’s convent during his pilgrimage to Saint Martin’s tomb, and became her secretary.
Her trusted friend and councilor, Venanzio dedicated many letters and poems to Radegonda testifying to the intense friendship and the deep affection that bound them.
We like to remember a short piece of writing in which Venanzio invites his friend to drink a glass of good wine – vina benigna – to refresh herself after great exertion. 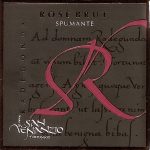